New Jersey and The Great War 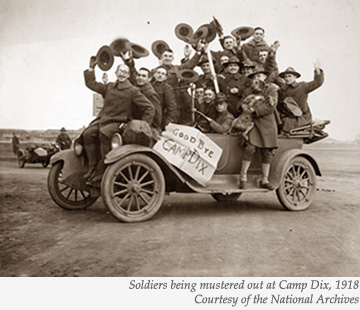 When the United States entered World War I on April 6, 1917, New Jersey joined other states in sending resources - human and material. But, as has been the case frequently in the history of the Garden State, its unique location on the busy Atlantic coast and diverse mixture of residents and resources led to other significant contributions to the national effort. From the outbreak of hostilities in Europe in 1914 until the 1918 Armistice, New Jersey businesses boomed, ultimately providing munitions, ships, chemicals, automobile parts, and petroleum products to the Allies. New Jersey also left its mark on President Woodrow Wilson, whose path to the presidency went through Princeton University and the New Jersey State House. The establishment of Camp Dix, Camp Merritt, and other military installations around the state impacted numerous young recruits who flooded into New Jersey for training, and then embarked from Hoboken for action overseas.

In the early years of the conflict in Europe, President Wilson walked a delicate tightrope of official neutrality balanced with steadily increasing economic support for the Allies – a testament to the mixed sentiments of an increasingly diverse populace. Events would soon force America’s hand. Captured documents indicating plans for German sabotage were published in a New York City newspaper 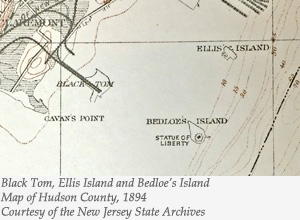 in August 1915. Then, on July 30, 1916, railroad cars packed with ammunition blew up at the Black Tom depot in Jersey City - rocking New York Harbor, killing seven people, and spewing shrapnel that tore holes in the Statue of Liberty. The blast caused $20 million damage in New Jersey and lower Manhattan. There was much speculation about what touched off the explosion, but the real cause was no accident; it was deliberate sabotage. Count Johann-Heinrich von Bernstorff, the German ambassador to the United States, had been funded by the German government to set up a network of saboteurs to destroy the war supplies the Allied powers were able to purchase. Less than six months later, another explosion occurred at a factory in Bergen County that manufactured artillery shells for the Russian army, and other cases of sabotage occurred on New Jersey ships, docks, and trains.

"Vickers expects call for Fourth within 24 hours. Colonel of local regiment says the boys are ready to flock to colors at a moment's notice." - Jersey Journal, April 7, 1917

The U.S. Congress passed the Selective Service Act of 1917 on May 17. In all, New Jersey would contribute 72,946 conscripts and 46,960 volunteers. Counting those already in the service, more than 140,000 New Jerseyans served by the war's end in November 1918. Women made up the deficit in the workforce, often in fields previously closed to them. For example, more than 100,000 American women found work with the railways, and an equal number were employed by munitions plants. 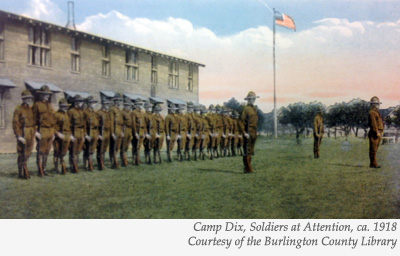 New Jersey’s contributions went much further. The federal government created or enhanced 38 military installations in New Jersey, including Camp Dix, the training facility near Wrightstown that later became Fort Dix. Camp Dix opened on July 18, 1917, and the 78th “Lightning” Division was activated there on August 29, 1917. With men from New Jersey, New York, and Delaware, the 78th sometimes trained with picks and shovels in preparation for trench warfare. They arrived in France in June 1918 to join the final offensive against German forces. Many New Jersey-born African Americans joined the 369th Infantry Regiment, a unit organized in nearby New York that went onto become the first black regiment to serve with the American Expeditionary Force.

Building on their invaluable contributions to filling voids across the American economy, about 21,000 women served in the Army and Navy Nurse Corps. New Jersey was the training site for approximately 300 women who served in the Army Signal Corps as bilingual (French-English) long-distance operators. Women from the state campaigned in Liberty Bond drives to raise money for the war effort, while also volunteering to serve with aid organizations such as the Red Cross.

"Announcement was made today by the Dupont Powder Co. that it will employ women munition makers at 'war' plants at Carney's point, N.J." - Asbury Park Press, August 23, 1917

With its robust and vibrant industries, New Jersey found itself uniquely prepared to address the growing economic challenges created by the European conflict prior to official United States involvement. This was particularly true of its chemical industries. To fill British orders in 1915, Hercules Powder produced 150,000 pounds of cordite per day at the company's Kenvil plant, and acquired another plant in Gillespie. Du Pont's munitions plant at Carney's Point had expanded to 67 times its prewar capacity by 1917, employing 25,000 workers. Many New Jersey manufacturers, including Singer Sewing Machine Company in Elizabeth, converted their normal production to wartime materials. By 1918, New Jersey was the largest supplier of munitions in America.

Before the war, 90 percent of the dyes used in the United States were imported. During 1914 Germany continued to exchange dyes and pharmaceuticals for American textiles. The termination of German exports in 1915 by a British blockade was met with the Emergency Dye Tariff Act of 1916, which encouraged Du Pont to acquire indigo dye technology and build a dye works at Deepwater, New Jersey. By the 1920s, Du Pont became the most important dye manufacturer in America. 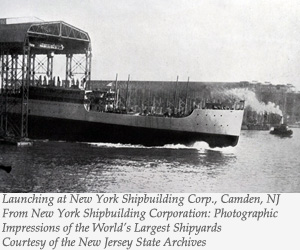 In other areas, New Jersey pharmaceutical companies began to pursue research, a field previously dominated by Germany. Likewise, New Jersey's shipyards increased their output in the war effort dramatically. The New York Shipbuilding Corporation, located at Camden, received orders for 30 destroyers between July 11 and December 29, 1917, as well as orders for major components for transport ships under construction elsewhere. This corporation quickly added the Destroyer Yard and the Middle Yard to accommodate wartime production at Camden.

New Jersey’s considerable contributions to the Allied victory are clear. These include the leadership of President Wilson, economic contributions spanning diverse industry sectors, vital military training camps, and the signing of the Knox-Porter Resolution by President Warren Harding officially ending America’s involvement in World War I in Raritan, New Jersey on July 2, 1921.

Of course, the greatest legacy any state or nation can leave in times of war is the bravery and sacrifice of its 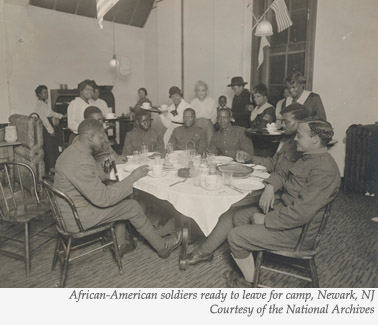 service members. For New Jersey, this includes men like Trenton’s own Needham Roberts. An African American soldier from the U. S. Army’s 369th Infantry Regiment, Roberts, along with a fellow African American soldier William Henry Johnson, bravely fought off a 24-man German patrol despite being wounded. For his heroism, Roberts received both the American Purple Heart and the Croix de guerre military designation from the French government.

Overall, American forces, including many soldiers from New Jersey, made their most noteworthy contributions in the field at the Battle of Saint Mihiel, from September 12-16, 1918, and during the Meuse-Argonne Offensive, from September 26 until the Armistice on November 11, 1918. For their extraordinary courage and valor, a number of New Jerseyans were awarded the Congressional Medal of Honor, the nation’s highest military honor:

America’s most famous World War I enlistee may have been the poet, Alfred Joyce Kilmer of New Brunswick. Kilmer attained the rank of sergeant and was tragically killed at the Battle of Ourcq on July 30, 1918.

New Jersey is decorated with numerous monuments and memorials marking The Great War and the individuals who bravely served in it (see: NJ’s monuments location page). The War Memorial building in Trenton and Gutzon Borglum’s Wars of America sculpture in Newark are but two of the many examples of the state’s contributions to the Allied victory. 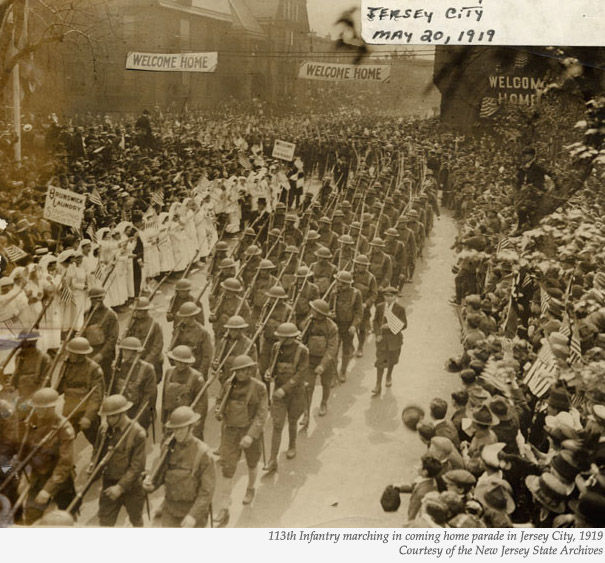 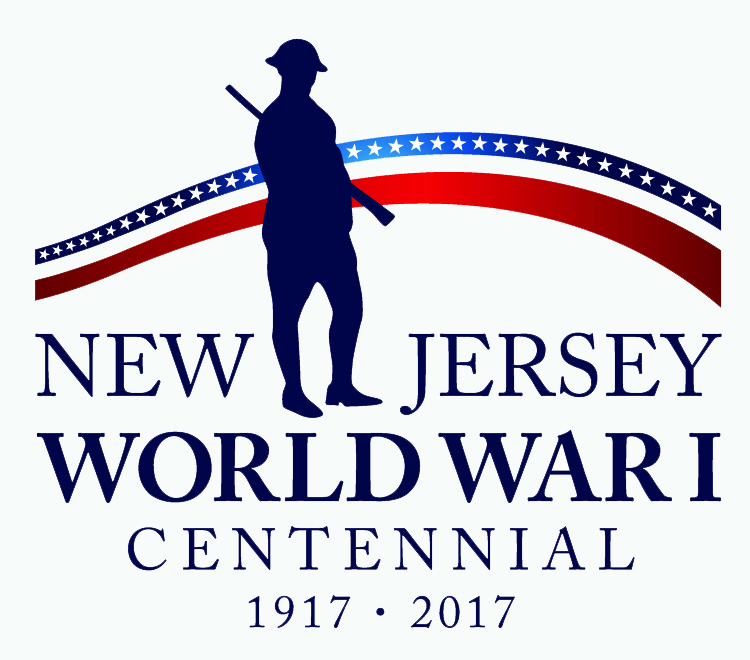