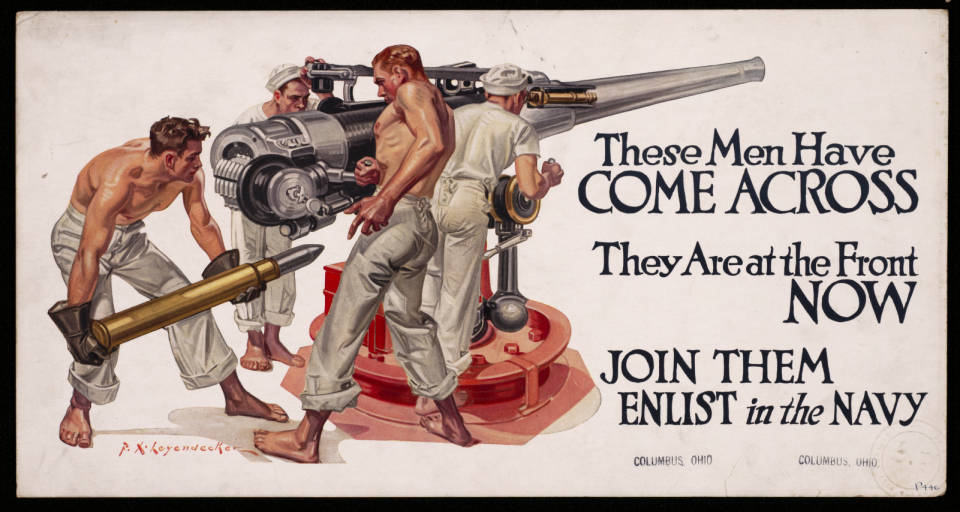 Ohio in World War I

World War I was a global war centered in Europe that lasted from July 28, 1914- November 11, 1918.  The United States' entry into the war came in April 1917, after two and a half years of efforts by President Woodrow Wilson to keep the country neutral. Ohio played a valuable role in the United States’ involvement in World War I, a war that changed the trajectory of the 20th century politically, culturally, socially, and globally. This directive aims to help Ohioans rediscover the ways in which past Ohioans contributed to and experienced the Great War and how those contributions and experiences created a lasting impact on the state of Ohio.

Ohio was a microcosm of the nation’s role and reaction to a modern European war and Ohioans supported different sides of the war when it began in 1914. They debated the ethics of profiting from the war by supplying one or both sides with weapons and supplies and they railed against Germany’s submarine warfare and the limitations it placed on Ohioans’ freedom of the seas as well as the civilian bystanders it caught in the crossfire.  As support gradually shifted to Great Britain and the Allies, many Americans questioned German-Americans’ loyalties, and public debates ensued over issues of culture, religion, language, and American identity in a multicultural United States.  As a result, anti-German sentiment developed in Ohio and across the nation as it entered the war in 1917 and 1918.

At the same time, thousands of Ohioans volunteered for military service for many different reasons, including the opportunity to travel abroad, and Ohioans contributed significantly to military forces in World War I.  By the end of the war, Ohio had sent approximately 263,000 men and women into service, which constituted an impressive 5.3% of the nation’s military man power, whether they were national guardsman, volunteers, or draftees. Approximately 6,500 Ohioans died from battle wounds or disease during the war. Some of the military units in which Ohio had a significant presence include the 42nd “Rainbow” Division; the 37th “Buckeye” Division, which had been the state’s National Guard unit; the 369th and 372nd Infantry Regiments, who received the Croix de Guerre; and the 83rd Division, which was comprised primarily of Ohio’s draftees. These units played vital roles in the Western Front, pushing German armies back and recovering towns in France and Belgium. Within the 83rd Division, the Ohio-dominated 332nd Infantry was the only U.S. unit to fight alongside the Italians. Additionally, many prominent Ohioans provided political, military and economic support during this time. For example, President Wilson’s Cabinet included Ohioan Newton D. Baker, the Secretary of War responsible for preparing the nation’s military for the war by appointing General John J. Pershing to head the American Expeditionary Forces and ensuring America’s fighting forces remained independent and did not simply fill the ranks of the other Allied armies.  Colonel Charles Young overcame stifling inequality as a soldier, diplomat, and civil rights leader to become a prominent figure in the years after the Civil War when the United States emerged as a world power.  With the arrival of World War I the public and especially African-Americans considered the possibility of Young receiving a major leadership role in the war. Instead, he had met challenges of racism, bigotry, and discrimination embedded within society and the military and Young was forced to retire.

Thousands of soldiers from around the United States began their military service at Camp Sherman, located in Chillicothe, Ohio.  Camp Sherman was one of thirty-two training camps used in World War I and was the third largest in the nation. Over 120,000 soldiers, largely from Ohio, Pennsylvania, Indiana and Tennessee, were trained at the facility, which began receiving recruits in September 1917. The camp was eventually home to four different divisions: the 83rd, 84th, 95th, and 96th.

During this time Ohio women enlisted in the military, and for the first time they were not relegated to auxiliary service organizations. The federal government coordinated supporting activities for the war effort through the Council of National Defense (CND) and its state, county, and local subsidiaries. Federal intervention in local affairs and private businesses to support a national war was a new concept for Americans. Ohioans responded overwhelmingly to directives from the CND and other government organizations, including the newly-formed United States Food Administration under the direction of Herbert Hoover. For instance, Ohioans planted Victory Gardens to grow their own food and ensure U.S. military members had the food they needed to be effective soldiers.

On the home front Ohio exemplified World War I’s many social implications and the aftermath of the war was acutely felt. The war in general and the draft in particular challenged the pacifist beliefs of Ohio’s Amish, Mennonite, and Quaker communities. After faithfully serving the federal government in the military and on the home front, black Americans attempted to claim equal rights, working-class men demanded better wages and working conditions, and women argued for the right to vote. The social turmoil following the war included mass migrations from rural areas to cities and from the South to the North. Ohioan Warren G. Harding ran for president on a platform that included a return to normalcy, and his presidency encompassed great social changes like prohibition and white female enfranchisement.