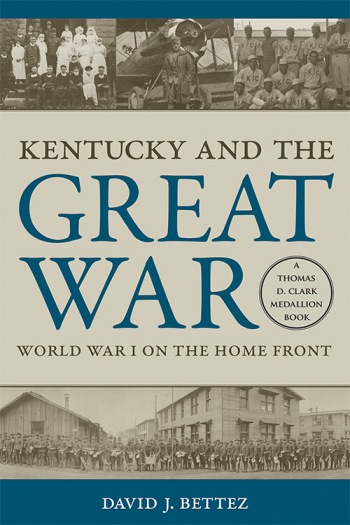 The Filson Historical Society has a treasure trove of photographs, memoirs, news accounts and other information about Kentucky in World War I.  Startexploring online here.

Louisville in the Great War

Louisville was, of course, very actively involved in the Great War with the construction of the army training facility Camp Zachary Taylor in 1917, and over 10,000 local soldiers serving in the war.
​Read More

Those Who Served and Those Who Never Returned

A breakdown of these figures show that there were 12,759 men in the regular Army, 7,518 National Guardsmen, 2,526 in the Reserve Corps, 2,734 volunteers, and 58,635 drafted men. Seven Kentuckians were Army Major Generals, nine were Brigadier Generals, and 23 were Colonels. Distinguished aviators were Major Victor Strohm and Lieutenant Colonel J. O. Creech.

Of the overall total 41,655 saw overseas duty, while 2,418 deaths occurred among Kentucky troops, 890 of which were battle deaths.

The Armistice between the warring nations of WWI was signed on November 11, 1918, at 11 a.m.  For 23 years, Americans recognized the 11 hour of the 11th day of the 11th month as Armistice Day, the end of the War to End All Wars.

After World War II, Armistice Day was re-named Veterans Day to accommodate those who fought in the most recent war.

As KDVA Deputy Commissioner Heather French Henry wrote in an Armistice Day op-ed, it was the needs of World War I veterans that prompted Congress of the time to expand benefits for veterans, including insurance, disability compensation and vocational rehabilitation.