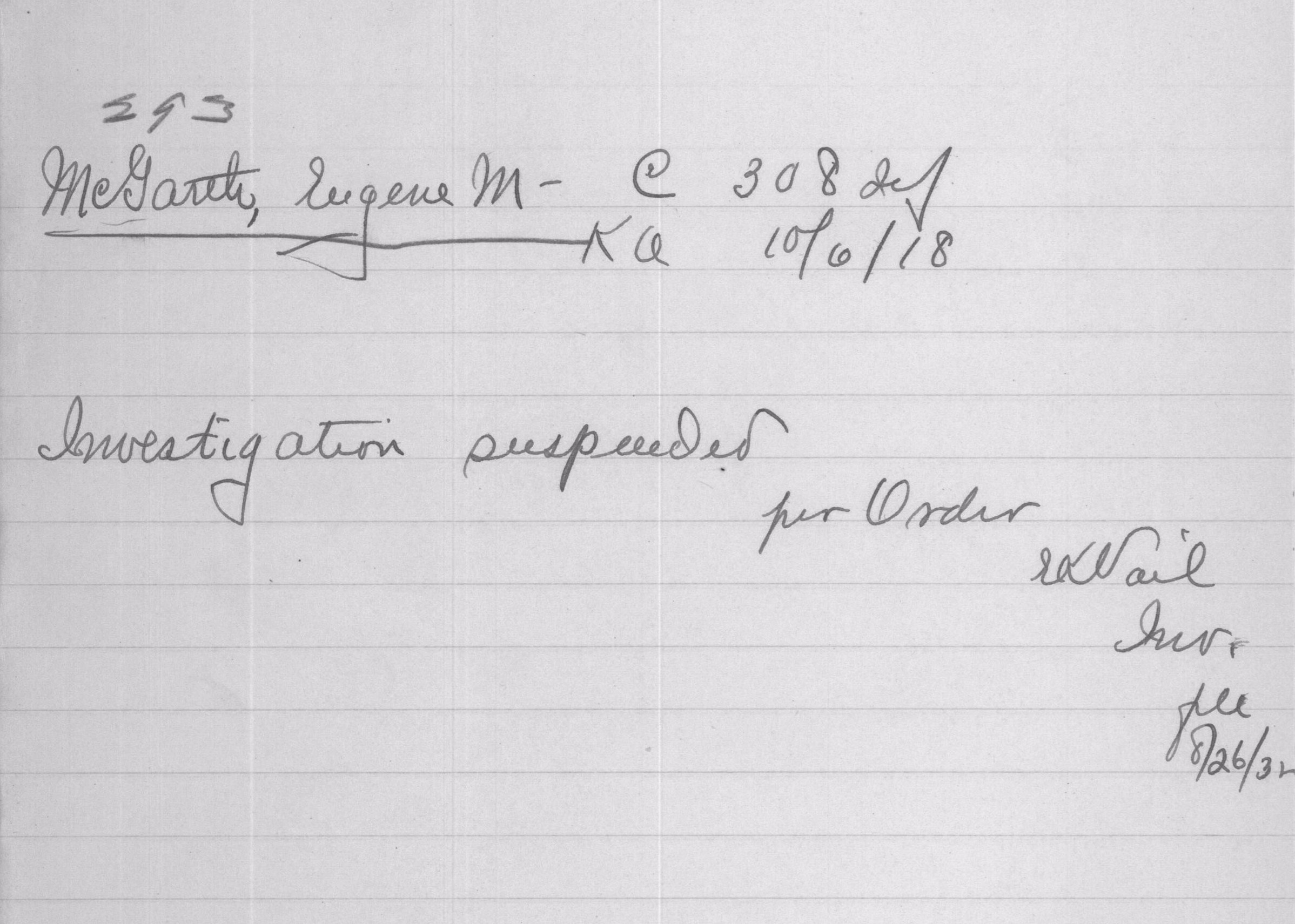 In this section you will find 'open cases'. Part of Doughboy MIA's mission is to look into the case of each man and make a determination (if possible) as to what likely happened to that man using whatever tools we can. and make that information available. We are also interested in straightening out mistakes which might have occurred during initial investigations by the Graves Registration Service and ABMC following the war and during the active search phase (which effectively ended in 1934). The U.S. Quartermaster Corp Graves Registration Service did a phenomenal job after the war in identifying the thousands of sets of remains which had no identification at time of disinterment, or in cases where identity was in doubt. Most impressively, they did it all with little more than paper forms and shoe boxes full of index cards! Nevertheless, mistakes were inevitable and information and details sometimes slipped through the cracks, leaving some men with no identity or identified grave. We also have technology at hand now that they didn't back then, making the possible location and identification of remains that might still be out on the battlefield, or interred in a grave marked 'Unknown', possible.

By 1934, when all investigation was suspended, there were some 1,697 sets of remains resting in American cemeteries under headstones inscribed 'Here Lies In Honored Glory An American Soldier Known But To God'. These became popularly referred to as the 'Unknowns'. When the chapels were constructed on the grounds of the U.S. cemeteries Over There, they included Walls of the Missing. On these various walls were inscribed for all time the names of all men who had been listed as Missing in Action in the general vicinity of that location, or with a unit that had operated close by, or who were Lost or Buried at Sea. There are currently 4,423 names on the walls.

Certainly then, there are 1,697 names on those Walls who belong to the remains in those 1,697 'Unknown' graves. Might it yet be possible to 'marry' a name with an interred set of remains? We believe that in at least one case - and possibly more - that it can. And we intend to try.

Below is Case #1 - the case that started Doughboy MIA and thus we use it as an illustration of the way many of these cases go, so bear with us. A list of some of the more interesting open cases follows, though we will eventually be looking at each and every case we come across.

On October 5th, 1918, while elements of the 1st Battalion/308th Infantry Regiment of the 77th Division was surrounded in the Charlevaux Ravine within the Argonne Forest in France (an episode that will forever be famous as the saga of the Lost Battalion), one Eugene Michael McGrath, a private in Company C, was killed by shrapnel. His body was to lie in his funk hole (fox hole) for three days until the full relief of the unit on the morning of October 8th, 1918. Soon thereafter, he was buried in grave #43 in Temporary American Cemetery #745. While no dog tags were apparently found on the body – none were affixed to the cross at the head of the grave nor interred with the body – someone must have at least had a clue who he was, as the initials E M were marked on the cross. No other KIA in the Lost Battalion, nor anywhere in that section of the Argonne that had those same initials, was buried in that cemetery. Further investigation has proven that of the other four men killed in that general area, bearing those initials, all are accounted for, making the body in that grave without doubt that of Eugene Michael McGrath.

In February of 1919 members of the 805th Pioneer Infantry, working for the Graves Registration Service of the AEF moved into the area and began combing the vicinity around the cemetery and Charlevaux Ravine for addition MIA’s reported from the actions there. The 805th also was responsible for care-taking cemetery #745, and during this time the graves were renumbered in official paperwork using a different system, and McGrath’s grave number 43 became grave number 87.

In March and April, 1919, the 805th evacuated cemetery #745 in its entirety and the bodies were transferred to the main collection point at cemetery #1232, which would eventually become the huge Meuse-Argonne Cemetery we know today. During this transfer, the cross at the head of McGrath’s grave (#43/87) became separated from the body, making any identification of his remains impossible. Consequently, these remains were concentrated to a temporary ‘Unknown’ grave and when later identification proved fruitless the remains were interred in a permanent grave in cemetery #1232 under an ‘Unknown’ grave stone.

McGrath's parents received the notification of their son’s death on the Wednesday before Thanksgiving, 1918. With no further word from the government concerning him, they made inquiries to the Graves Registration Service in February, 1919, but to little effect. A short series of letters followed between then and April, 1921 when the government conceded that while Eugene’s grave was unknown and likely would never be identified, they were confident that he was within the main cemetery in one of the ‘Unknown’ graves there. Following the settlement of his government death insurance policy, the next contact between family and government would be during the Gold Star Mother’s tours offered by the government in 1930 and 1931. Mrs. McGrath turned down the offer as there was no grave for her to go and see and her health would not permit it. For all intents and purposes, the burial files on those men KIA-Body Not Recovered and MIA during the war were all closed by 1934 and no further identification work was done. McGrath's case was closed in 1932 and his family all died never knowing what happened to him.

Then in 2001, one of McGrath’s dog tags turned up on the hillside where the Lost Battalion had been surrounded, and by 2005 it had made its way to me and I began to research what had happened to him. I first had pulled and copied McGrath’s Burial Case File and it dead ends, of course. However, I have also examined a myriad of other Burial Case Files from cemetery #745 in hopes of finding clues that might assist in identifying him. These have included a file for one Sigurd Lima, also killed in the Charlevaux Ravine. Lima’s remains went unidentified until 1932, when he was finally ID’d through dental records. However, the most important fact I learned concerning Lima’s case is that prior to his remains being identified, while they were still officially classed as unknown, they did have a Burial Case File associated with them, filed under a control number instead of a name and this number was proceeded by a ‘U’ (for Unknown). Therefore these files for unidentified remains were known as the ‘U files’. Thus Lima’s remains held a U designation until identified in 1932, when his U file was merged with his actual Burial Case File (which, until then, would have dead ended, much the same as McGrath’s does) at which time the ‘U’ number was dismissed.

The most significant feature of Burial Case Files (as far as identification purposes goes anyway) is that each file virtually always contains a form that lists just where the remains were originally found, be they in a battlefield grave, found out in the open in the forest, in a local cemetery – or in a US temporary cemetery, which would also list the grave number there. This was known as GRS Form #1-A and map coordinates would be given for any locality for accuracy. More importantly, there would also be one or more of a form 16-A. This is a disinterment/interment report that was filled out every time a set of remains was moved from one grave locality to another, giving particulars about the remains, where they came from and where they went. And for every set of remains permanently interred in France, there would be a 16-A that would show where those remains wound up in the permanent cemetery; a ‘cemetery address’, if you will, listing the block, row and grave number. That said, there should exist somewhere a set of U files for all the Unknowns buried in US cemeteries overseas, each with one or more form 16-A's - and one of those would show a set of remains found in US temporary cemetery #745, grave # 43/87, and where in the US cemetery #1232 those remains rest to this day. Find that paperwork and we have found Eugene Michael McGrath - and, as you'll read below, possibly others.

Last summer, I was in contact with the former director of the US cemetery at Belleau Wood, who shared with me that he had – on site – the 'burial cards' for the men in his cemetery, including the cards for the Unknowns there. Here was some interesting information! These burial cards are index sized cards which contain final movement information on a set of remains. What I further discovered though, was that his cemetery appears to be the only one that has those burial cards on site and the 16-A's that generated the information for those cards were nowhere to be found. A research trip to the National Archives at College Park, MD, at the end of March, 2016 - where all the records of the Graves Registration Service for WW1 are kept - proved that while the burial cards for the known buried at the other cemeteries are in the files there, the cards for the Unknowns are not...

Where are the burial cards or the burial records for the Unknowns then? We don't know yet, and for these we have searched for 12 years now. However, with each research expedition, with each research inquiry, we draw closer to locating them. If we can find them, then it is possible that we may be able to locate not just McGrath, but a few other missing men as well and provide a necessary service to the DPAA, who have neither the funding nor resources to chase after WW1 MIA’s. No matter – that’s part of why Doughboy MIA exists. If we can find even one man it will all have been worth it.