Making of the Book

The Lost Sketchbooks  I. Discovery

Ned Shenton and I have been friends for nearly two decades. We first met at The Explorers Club, a New York organization of field scientists and geographic explorers. Ned was invited to join on account of his research with submersibles, including working with Jacques Cousteau  One day in 2009 Ned asked me if I would be interested in helping him put together a website honoring his father, Edward Shenton.

Along with being an author and a teacher, Ed Shenton was an important illustrator of books and magazines. He drew for Scribner’s Magazine from 1929 until its demise in 1939, and as house artist, did covers for many of the greatest writers of the time. I thought this would be an interesting project and I said yes. 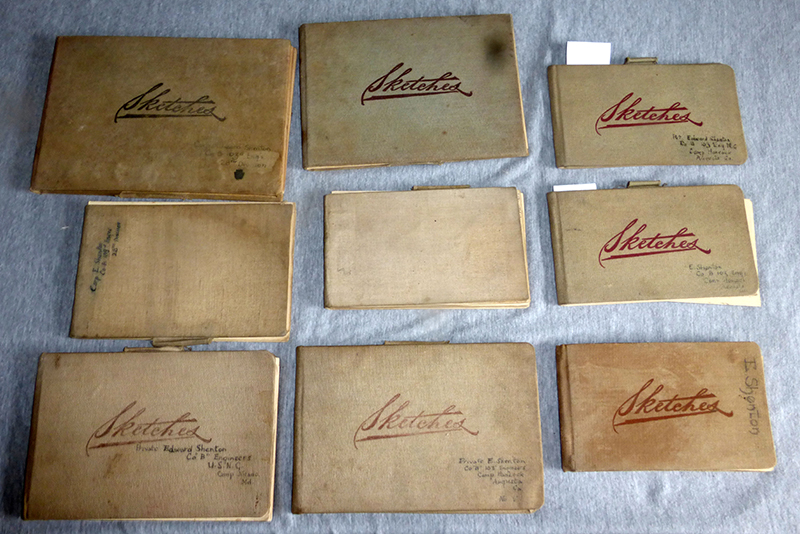 As a first step, Ned brought over some boxes of his father’s papers: stories, drawings, book covers etc. for me to scan. There were old notebooks with drawings of soldiers and knights, small booklets about the early days of auto racing with wonderful drawings of the cars and drivers, faux magazines of a humorous nature and drawings for his high school magazine.

There were book jackets from Hemingway, Fitzgerald, Faulkner and Marjorie Kinnon Rawlings and wonderful books written and illustrated by Ed about aviation in the 1930s. It was a treasure trove of art and writing, but what stood out were nine old canvas-bound books with the word “Sketches” on the cover in fancy script.

When I opened the first sketchbook I was surprised that these were drawings done during wartime. The first images I saw were a water color or a soldier with a rifle slung casually across his shoulder standing in a muddy lane. In the lower left corner was written, “The Sentinel, Sketch for comp. Sunday, Aug 26, 1917, Admiral Maryland” and to the right were the workings of a poem with only a few words visible and many erased. The colors were vibrant and I could feel myself getting hooked. 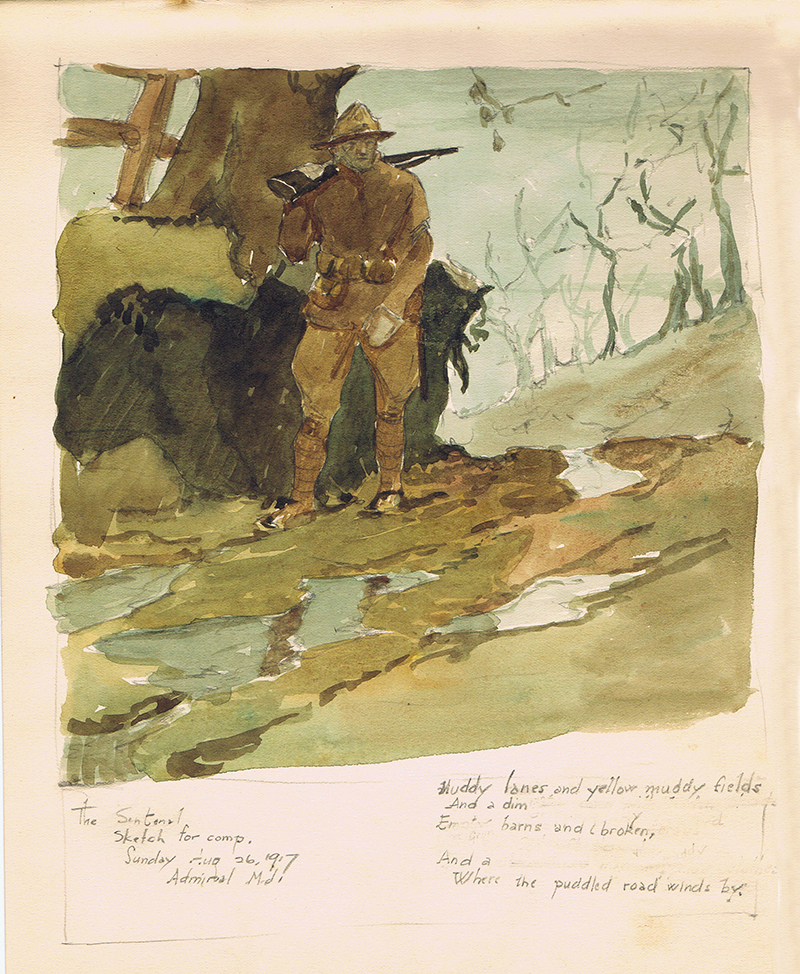 I am a visual person. I can spend hours looking at or working on images that I find compelling and all the images in that first sketchbook were compelling. There were five more watercolors, some unfinished sketches and seven exquisitely-shaded pencil drawings. The rest of the canvas bound books were equally enthralling. I scanned every page of the sketchbooks along with all the other artwork that Ned had brought over, and began to think about the website. For the time being, I put these amazing drawings to the back of my mind, and went on with the job at hand.