The Art of Warriors 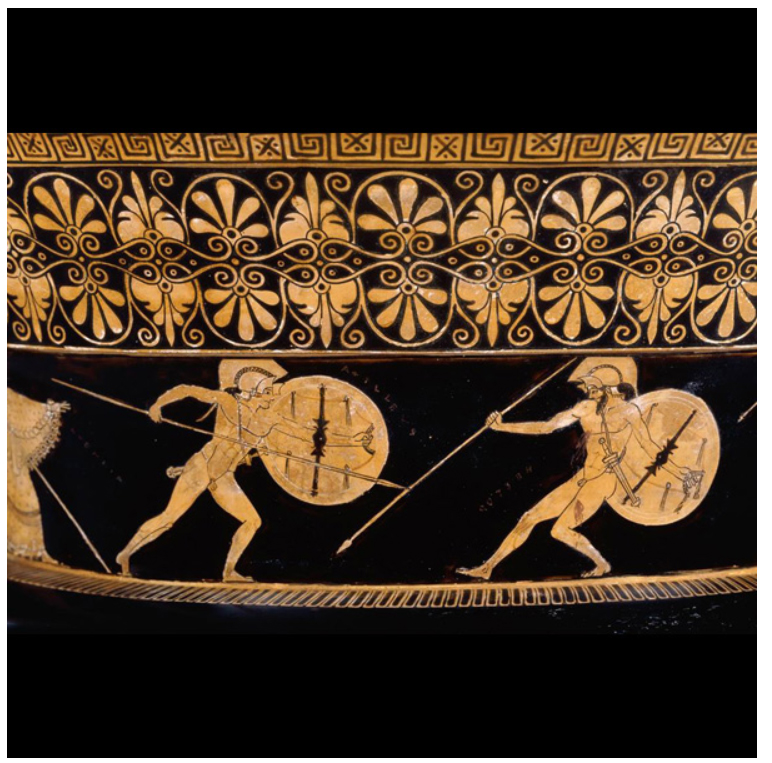 For tens of thousands of years, people have painted pictures, the earliest of which are incredibly well-developed images of animals, many now extinct; some are pierced with spears and arrows.

From the earliest days of civilization, art and war have been connected. Rulers of predynastic Egypt recorded their victories with images of bound captives and scavenged bodies; proud Greek cavalry still parade across the Parthenon marbles and Hector is slain by Achilles on a Greek bowl. Joshua fighting the battle of Jericho; Napoleon defeated at Waterloo; Hannibal crossing the Alps and George Washington the Delaware were all the subjects of heroic works of art.

Like kings, warriors have wanted to celebrate their exploits, but seldom had the means or the talent to do so. Regardless, some of the earliest soldier art is more than 2000 years old. Someone, perhaps the gladiator himself, recorded his victories with stick figures on a wall in Herculaneum In 79 AD. During the Napoleonic wars, French and British soldiers wrote their names inside the pyramids. Egyptian, Greek, Roman, Barbarian, French, English, American and many other men-at-arms have all left their marks in faraway places but, until paper became readily available, none could record their own experiences in detail.

During the nineteenth century, artists were employed to depict wars. Such publications as The Illustrated London News and Harper’s Weekly fed their readers' insatiable appetites for accounts from the front lines of the Crimean War and the American Civil War, with both epic prose and detailed drawings. As this was before photography could capture the action, artists would draw every aspect of the battles. Their work was made into etched plates and printed for mass consumption. It seemed that people could not get enough of the adventure and suffering of men in combat. Images of the everyday lives of soldiers in exotic lands, men in uniform and on horseback, victorious leaders, heroes and their trophies, dead soldiers and the ruin of war filled the pages of the weekly magazines.

In World War One, the American and British armies employed artists such as John Singer Sargent and Paul Nash to create works that captured the essence of the war. Some, like Nash, were front-line soldiers who later became war artists, others, Sargent among them, were never in the army and were contracted to create paintings. Regardless of their backgrounds, they were artists first and soldiers second, if at all.

Some men were artists when the joined the army, others had natural talent but no training, but they all loved to draw and, when time and conditions permitted, they filled many sketchbooks with their artwork. These were the soldier artists; they were soldiers first and artists second. They were trained to fire their rifles or machine guns, to throw hand grenades and use their trench knives or bayonets to kill an enemy close-up. Some learned to dig trenches or drive tanks. Their perspective was different from war artists or correspondents. Their audience, if they had one, was their families back home or their fellow-soldiers. They had no deadlines, no assignments, no editors or critics; they drew what they saw and what they felt in the moment. Unlike any other wartime artwork, theirs is a window into a particular soldier's individual and everyday concerns.

I have chosen to concentrate my research on soldier artists, and will be telling their stories and sharing their seldom-seen creations.