The Following is Dedicated to the Brave Men and Women of Our Nation's Polish American Community, Who by Recognition of Their Great Valor, Distinguished Themselves During the Great War.

Please Join Us !  Pay Tribute to Them !  Within These Pages, Please Share* Your Family or Community Member's Story of Valor !

Place and date: Near Exermont, France, 5 October 1918
Entered service at: East St. Louis, Ill.
G.O. No.: 74, W.D., 1919
Citation: During the entire day's engagement he operated far in advance of the first wave of his company, voluntarily undertaking most dangerous missions and single-handedly attacking and reducing machinegun nests. Flanking one emplacement, he killed 2 of the enemy with rifle fire and captured 17 others. Later he single-handedly advanced under heavy fire and captured 27 prisoners, including 2 officers and 6 machineguns, which had been holding up the advance of the company. The captured officers indicated the locations of 4 other machineguns, and he in turn captured these, together with their crews, at all times showing marked heroism and fearlessness.

Sgt. Michael B. (Eliasz) Ellis. Born at St. Louis, MO, in 1892, Sgt. Ellis was a member of the Us Army First Division's 28th Infantry. During the fighting in World War I the stocky 5' 5" twenty year old Sgt. Ellis became the Polish-American version of the famed Tennessee Sgt. Alvin C. York. He and his war exploits were immortalized in a series of articles entitled "America's Heroes of the Great War" penned by the 26th President of the United States Theodore Roosevelt for the "Chicago Herald-Examiner". He was awarded the Congressional Medal of Honor "for his leadership and spirit in battle (which at time included hand to hand combat), his fearless attacks on machine gun nests and his single handed capture of over 60 German prisoners." 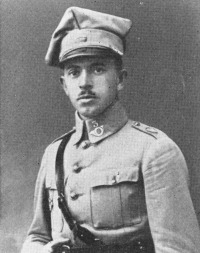 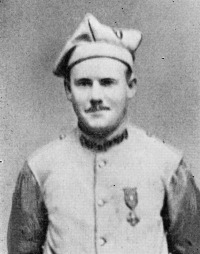 Two of the Rochester contingent to the Polish Army were decorated, as records show.

Antoni Nogaj received the Croix de Guerre from the Government of France.