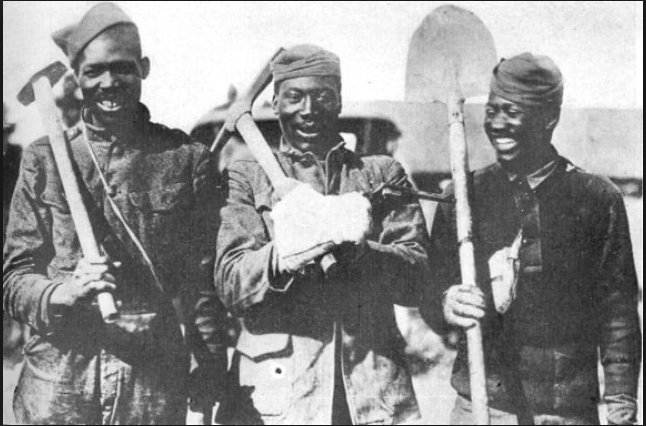 Singing Soldiers, a book exclusively about African-American soldiers’ songs, was also written by John Niles. Published in 1927, two years before The Songs My Mother Never Taught Me, Singing Soldiers first drew criticism from white veterans who felt that singing also played a significant role in their military experience and that they too had to have a songbook of their own.33 The involvement of African-Americans in the war was controversial. It was heavily debated as to whether they should be allowed to serve in the military. They were strictly segregated from their fellow white Americans and received almost no CTCA support. They served under French command and many were assigned to noncombatant roles.34 Although they suffered racial discrimination at the hands of their fellow citizens, it can be argued that segregation provided them more opportunities to demonstrate their patriotism and contribution to the war effort. Prevalent elements in the songs include the derogatory tendency white soldiers spoke to black soldiers and their dissatisfaction with their military role. It was clear that African-Americans had to prove themselves worthy to be on the battlefield.

Although Niles would have appeared racially tolerant by publishing Singing Soldiers first, the prevalence of racism during the early 20th century is evident in his commentaries. He refers to African-Americans as “colored boys,” in a way of removing masculinity and strength from men. In “Ole Ark, he notes that African-Americans sang in “his childish way”35 in which later he tied the idea of childishness to laziness. In his commentary for “Gimmie Song,” soldiers are looking for God’s help, but Niles portrays them as “the slow, easy-going Southern negro.”36 With these illustrations, modern readers can realize that despite of racial stereotypes, singing and music provided opportunities for men to meet on the level.

While themes in Singing Soldiers are similar to The Songs My Mother Never Taught Me including: affairs with local women, anti-German rhetoric, and conflict between military ranks, Singing Soldiers seems to have an emphasis on death. Since black soldiers were often assigned to service units, their task was to keep the camps clean and hygienic while white soldiers did the fighting.37 Among these tasks was burying the dead. Digging graves for dead soldiers is vividly illustrated in “Grave Diggers.”

Notice how “I’ve got a grave-diggin’ feelin’ in my heart” is repeated constantly. Naturally, the sight of bloated corpses and bullet-ridden bodies would have affected the morale of the burial squads. Yet, with heavy hearts, they performed their duty while comprehending the spectacle of death. The underlying theme of homesickness affected their encounter with burying the dead. The song “Long Gone” suggests that soldiers will not be able to get home alive. Expressing sorrow and loneliness, both black and white soldiers have to sadly accept that their service has one thing in common; death in a foreign land.

Song was no less a weapon or a comforter during the war. Its power could rally an entire nation or speak intimately to a soldier.  No other form of expression could provide hope and encouragement to relieve a soldier’s sense of uncertainty on the battlefield. From the CTCA’s highly politicized use of songs to soldiers making up their own songs on the battlefield, singing was a universal expression that everyone appreciated. Amidst the roaring guns, the lonely soldier found refuge in the warm melodies of his quiet voice.

33. Reed, p.127
34. However, for those who did see action, their training was severely underfunded with no armory and significantly less equipment than white soldiers. Being resourceful, black soldiers managed to get rifles by joining shooting clubs or buying them themselves. Gier, p.113
35. Singing Soldiers, p.84
36. Singing Soldiers, p. 84
37.
38. https://armyhistory.org/fighting-for-respect-african-american-soldiers-in-wwi/ accessed Sept. 20, 2018
39. Singing Soldiers, p.20