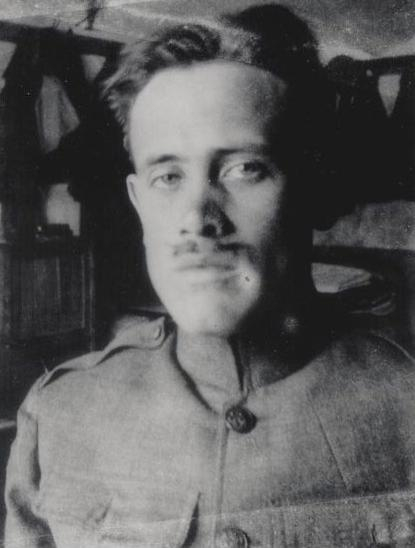 Lt. John NilesOne hundred years may have passed since the guns on the Western Front fell silent, but the songs the soldiers sang in the trenches live on and some are still enjoyed to this day. Memories of trench warfare in World War I are memorialized through pictures and historical footage. Since audio recording was still in its infancy in the early 20th-century, one could only speculate how popular singing influenced soldiers who sang in the battlefield amidst the terrorizing blasts of the heavy guns. Given the lack of evidence, the closest surviving sources we have today are the songbooks and literature that they left behind.

Reflecting upon experiences during the war, veteran John Niles wrote,

As the facts about this man’s war slowly come to light, we become more and more amazed at the many things that go to make up a major conflict. And in the conflict of 1914-1918 song was by no means the least of these.1

Niles was convinced that incorporating singing into military training was a significant part of the American war experience.

In an effort to keep morale high among the troops, Secretary of War Newton D. Baker proposed to create a Commission on Training Camp Activities (CTCA) that was tasked to help soldiers constructively manage their recreational time. President Woodrow Wilson approved the proposal on April 17, 1917 and Secretary 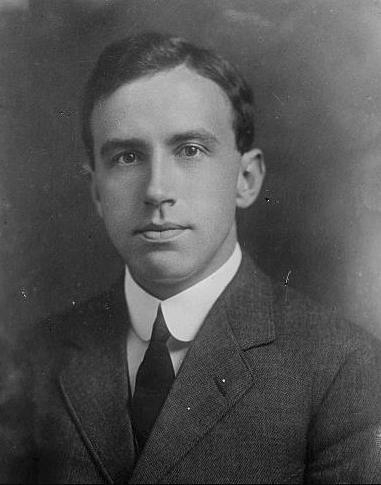 Raymond FosdickBaker appointed Raymond B. Fosdick, a social reformer, to head the commission and design a program aimed at improving soldiers’ well-being. Among these activities was singing.2 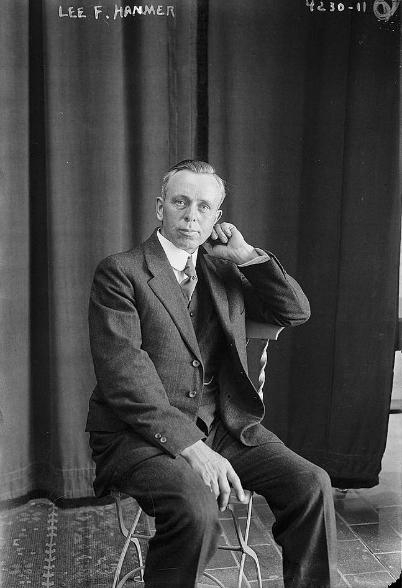 Lee HanmerUsing it as a military tool, the CTCA effectively used singing as a strategy to raise morale and increase cohesion between different soldier units. Troops viewed it as a form of expression and as a way to build camaraderie. Singing was synonymously viewed with the ability to fight well on the battlefield. It played an important role in the American perception and experience of encountering conflict. Thus, as American involvement in the war continued, the War Department expressed the growing urgency in developing camp bands.

The military was dependent on the Camp Music Division, a subcommittee of the CTCA headed by Lee F. Hanmer 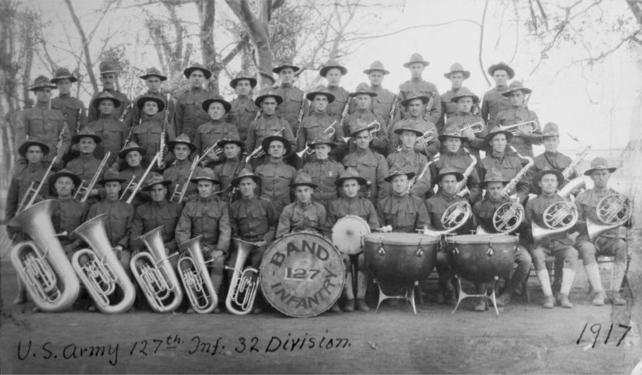 US Army Camp Band 127th Infantry 32nd Division whose goal was to train soldiers in music before deployment. Due to the increasing complexities of resources, Hanmer formed another subcommittee, the National Committee on Army and Navy Camp Music referred to as the “National Committee” and appointed W. Kirkpatrick Brice as its chairman.3 Fosdick eventually declared,

That contentment seemed to have been kept by singing because he further says that:

[singing] is the most popular thing we have tried thus far. The men are crazy about it, and the officers, too.4

The National Committee was tasked to organize and expand bands by appointing and training song leaders who in turn trained soldiers for mass singing events.5 They produced songbooks for soldiers, and published a weekly newsletter that facilitated spreading song leaders’ reports regarding training methods and songs that were popular among soldiers.6 In a nutshell, the National Committee was interested on how to captivate the attention of soldiers through song.

Music in the Camps

Music in the Camps, the official newsletter of the National Committee, was published weekly from November 1917 to May 1919. The newsletter program served as a way for song leaders to exchange ideas on training methods. Topics covered their own experiences that were reported to their fellow song leaders and to the National Committee. The Committee in turn would make suggestions concerning songs and activities implemented by song leaders, including songs that would maintain high troop morale. This newsletter also published stories that illustrate the power of camp music to unify diverse populations of soldiers; many of them still had family ties in the Central Powers. It was important for the committee to instill in the new recruits a unique American identity. The extent of the whole program was mass singing, concerts, song contests, and teaching methods.

Of all, mass singing seemed to be the most effective method. Camp Jackson song leader David Griffin wrote:

There is a big Chautauqua tent which holds about 2,000 men and entertainment is given every evening at 7. I get in about 20 minutes or 25 minutes with this audience every night before the show commences and reach a goodly part of the camp in that way, meeting a new audience every night. After that I go to some YMCA auditorium and hold just an evening of camp singing. I take a soloist or two with me and they add their voices to mine until the songs take hold.7

Song leaders were quick to note the success of this method. Mass singing was heartily welcomed by the soldiers. As documented, the groups could reach to about 42,000 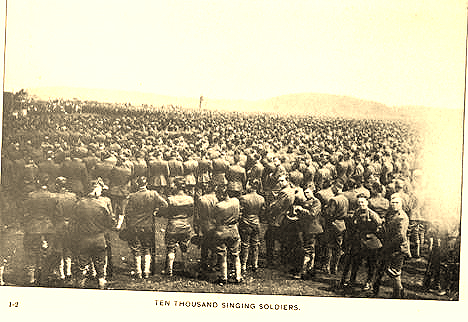 Ten Thousand Singing Soldiers men singing under the command of one song leader.8 Song leader George Mitchell of the Brooklyn Navy Yard and City Park Naval Barracks sent a caricature report to the National Committee and published in the newsletter on June 15, 1918:

A Song leader “Somewhere” on land – and somewhat “at sea” (having read Music in the Camps “at the end of a perfect week” – of discouragement). I am proud to tell you that the 10,000,000 men of my camp sang La Marseillaise (in French of course) without rehearsal. The commanding officer ran out of his tent shouting, “Where is the song leader?” and when I was found modestly running into his outstretched arms, he fainted on my forest green chest. After administering the necessary restorative, he came to, and patting me on the shoulder, he shook me by the hand, as he pinned a medal on my coat sobbing. “My boy, you have won the war!9

Although an exaggerated report, it is clear that mass singing played a significant role in military training. Not only did it improve morale, but it also allowed soldiers to coordinate themselves on the battlefield which ultimately tested their comradeship. How then were song leaders able to attract soldiers to this method? The polarity of military hierarchical structure and light-hearted entertainment may be the answers.

Attempting to spread effective methodical ideas, an article from Music in the Camps reveals how hierarchical structure helped facilitate the spread of information among troops. The first newsletter published on November 3, 1917 includes a report by Song leader Warren Kimsey of Camp Gordon, Georgia that described his efforts of establishing connections with military officers in the camp. He notes:

Had a conference with Major Gen. Swift and his staff this morning. That for which I have been working has been realized – once a week, beginning Monday afternoon, I am 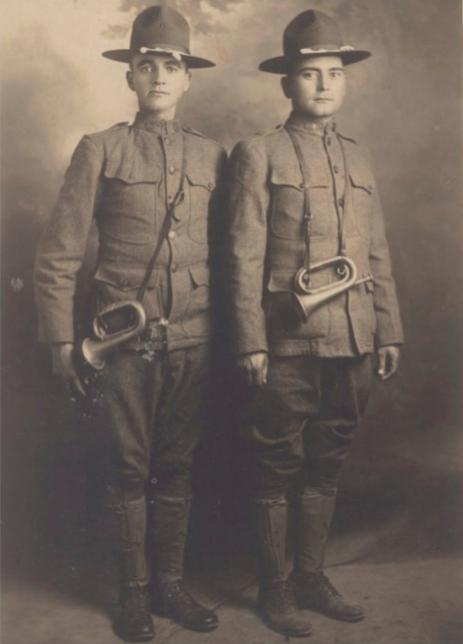 Buglers in the army to meet all the officers under five commanders. One group has Monday, another Tuesday, and so on. I am to give these officers practical instructions in chorus singing and they will in turn carry ideas on to their men. This gives me the opportunity to touch practically the entire camp in five days, once a week.10

Given the high population of soldiers, it would not be surprising that song leaders found it difficult to reach out to everyone as suggested by the passage.11 Kimsey took advantage of military hierarchy and taught commanders songs who in turn taught their respective regiments. Since there were fewer commanders than regular soldiers, it was easier for song leaders to have access to them. This solved the logistical issue. The army also had a Sergeant Bugler who was in charge of training regimental buglers. The Sergeant Bugler served both in the field and the garrison. When it came to instructing soldiers about singing, Kimsey reports in the same article:

I find that a song leader must use his whole body to convey the rhythm to these great crowds – keeping time with the arms plays a very small part. If the song is in march time, I march back and forth before the men; if it is in waltz time, I use a waltz step, and thus by an active use of my feet I am able to carry them thru songs that they are inclined to go to pieces on. Indirectly, I consider the feet the most important – next, the sway of the body, and last, the motion of the arms; and by combining these three I get the best results. For this work the leader must turn himself into a human metronome.12

Did commanders adopt this method of teaching? It is interesting to imagine unit commanders shouting cold orders at their men in the morning while gyrating and dancing to songs with their regiment in the afternoon. Combining the idea of rigid hierarchical structure with dashes of lightheartedness, song leaders would have encouraged soldiers the freedom to express themselves and convince them that the monotonous marching, pierced occasionally by the sergeant’s barking orders, was not as bland and boring as they thought at first. Given that preparing the soldier to meet the enemy on the battlefield was the military’s primary objective, song leaders believed that training soldiers through patriotic songs would make the soldiers stronger.13 Major General J. Franklin stationed at Camp Plattsburgh summarized well the objectives of including singing in military training:

A singing army is a fighting army.14

Below, you will find pdf copies of all the "Music in the Camps" newsletters published by the National Committee.